You are here: Home / Assistive Devices / Best Computers for People Who are Blind or Visually Impaired﻿ 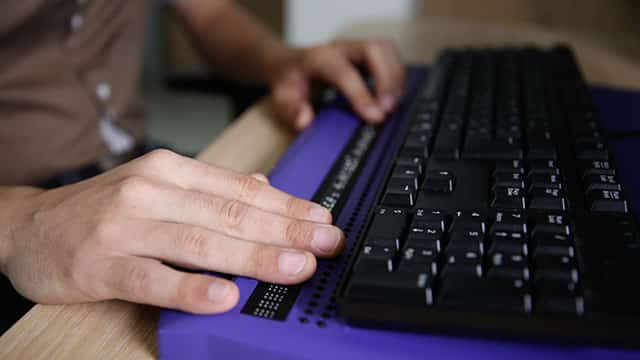 In a world of ever evolving technology, you might wonder how people with visual impairments can take advantage of the latest computer technology.

The visually impaired, like many people with disabilities, have been using computers for decades with the help of software and hardware that have continued to improve over the years.

How do people who are blind use computers?

Computers, laptops, notebooks, tablets, and smart phones have been adapted for people with visual impairments through special programs and equipment called assistive technology (AT) which is any technological device or service that helps people overcome the challenges of their disabilities.

As an example we use a plugin on this site called WP Accessibility, which enables functionality like skip links, large text options, and grayscale or high contrast.

AT includes everything from smart glasses for the blind to voice recognition programs that type for you and follow commands as you speak. Assistive technology allows people who are blind or visually impaired to utilize computers in a similar way as sighted individuals.

Understanding your options is key to choosing which devices and equipment will suit your specific needs.

Which is best for the visually impaired: a desktop, laptop, or tablet?

The answer to this question depends on what you plan to use your device for and your lifestyle.

Do you travel regularly? Are you a student? Do you work from home?

Each device has its own advantages and disadvantages, but the key is choosing a computer based on your specific needs.

If you don’t mind your computer being stationary, then a desktop might be the right choice for you.

Desktops offer larger storage capabilities and faster operating systems than portable computers. They often come with accessibility programs such as screen reader software and the ability to enlarge fonts and contrast colors and backgrounds (to aid colorblind).

With desktops, you can buy larger monitors and use braille stickers for the keyboard. There are also attachable screen magnifiers available for stationary computers.

Laptops and notebooks are lightweight computers that operate like miniature desktops. They’re great for students, people who travel a lot, or those who want to operate their computer from the sofa.

Laptops are less bulky than desktops too; a desktop requires a keyboard, monitor, PC, and mouse while a laptop has everything in one unit.

Some brands of laptops and notebooks have touchscreen capabilities that can be beneficial if you have difficulty keeping track of the cursor on the screen.

However, a laptop seldom has the same storage and speed capacity as a desktop and needs to be charged every 3 to 8 hours.

Tablets and smartphones are like small computers, but they do not have the same abilities and AT functionality as laptops and desktops.

Tablets and smartphones have built-in assistive software like computers, the applications you download may not be compatible with that software. In addition, websites and graphics do not always translate well on a mobile device.

On the other hand, there are tablets specifically designed for the blind and visually impaired like BLITAB®, the first tablet to integrate a refreshable braille display directly on the screen.

There’s also the voice activated AI of Siri (for Apple) and Cortana (for Android) that can make smartphones accesible for people with visual impairments.

Can people who are visually impaired or blind use “regular” computers?

There are few computers specifically designed for the blind and visually impaired. In most cases, people with visual impairments use regular computers equipped with technology to help them type, read, surf the web, email, and operate a computer like anyone else.

It is our opinion that the best computers for the blind are those with either a Windows or MAC [BV3] operating system because they have quality built-in accessibility options.

While built-in assistive programs have improved over the years, they are not the best technologies on the market for the blind and visually impaired.

Best assistive devices for people who are blind

Whether you are a student, in the work force, or want to stay up-to-date with the latest technology the following assistive devices and software programs are sure to impress you.

Braille displays are often used in conjunction with a screen reader.

Below are some of our favorite refreshable braille displays:

All three of these three braille displays are easy to transport and can be used to operate a smart phone, tablet, or computer.

MAC and Windows computers have built-in screen readers, but these programs have limited capabilities. The more advanced programs allow you to operate your computer through a text-to-speech feature and braille display.

A screen reader is like a virtual assistant that responds to voice and key commands to access applications on the computer and read documents or information on the web.

Here are 5 of our favorite screen reader software programs:

For people with low vision, screen magnifiers are a wonderful technology that provide access to a regular computer screen. There are many different software programs available but they basically do the same thing – enlarge text and graphics as the user moves their mouse around the computer screen.

The key to choosing the right software for you, is understanding what each program offers and whether or not those features will meet your needs. For instance, some programs only magnify to 20x and others magnify to over 60x the original text. The price of a screen magnifier software program ranges from free to several hundred dollars.

iZoom, Virtual Magnifying Glass 3.7, and MAGic are three programs that we feel are affordable and beneficial.

What is the cost?

Some of the best screen readers, voice recognition programs, screen magnifiers, and braille displays range from several hundred dollars to over two thousand dollars. A new computer plus any required assistive technology, could cost thousands of dollars,making it an unattainable option for low-income families.

Thankfully, there are organizations like Computers for the Blind who help by offering low-cost computers and laptops complete with many of the assistive technologies we’ve discussed.

Without assistive technology, the millions of Americans with vision loss would not be able to access computers and mobile devices that are so widely used in our society.

Advancements in assistive technology will continue to improve the experience of all computer users.