You are here: Home / Assistive Devices / Windows vs Apple: Which Computer is Best for the Blind? 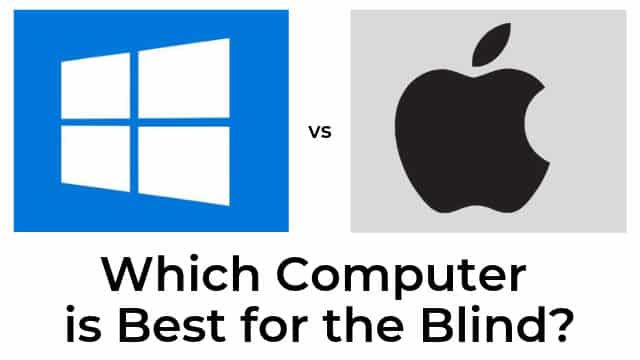 Windows versus Apple (or iOS) is one of unsettled debates of our time and if you’re a visually impaired person, this is an important question to ask before you purchase a computer.

However, the more important question is, which computer is best for your visual impairment?

Apple and Windows each have their advantages when it comes to the assistive technologies available for their computers. Deciding which one will fit your needs depends on what you want in a computer, what you’re going to use your computer for, your budget, and several other factors.

In this article, we offer an unbiased review of the capabilities Apple and Windows offers blind and visually impaired users, so they can choose a computer that will fit their needs and wants.

Why is a Apple Computer Best for the Blind?

It’s no secret that Apple is at the top of their game in the computer market.

Their computers and mobile devices are known for speed, capacity, and graphics as well as elite applications, designs, and software.

All of Apple’s laptops and desktops come equipped with some of the most advanced assistive technology for people with visual disabilities such as a built-in voice synthesizer and screen magnifier. We are particularly impressed with Apple’s VoiceOver screen reading program which offers the following abilities:

Apple’s abilities do not stop there

Apple’s refreshable braille display support is impressive because it can instantly sync with many compatible devices.

Moreover, you can sync more than one device to your Apple computer at a time allowing you to share your screen with several other people who are using braille displays.

If your computer is for personal use or if the majority of the people you communicate and work with use Apple computers, then we encourage you to invest in one. You may also want a Apple if you use the computer often or want it for entertainment purposes.

If you’re going to be exchanging documents with other people such as those drafted in Microsoft Office, you’ll want to buy a Windows computer. Apple computers only operate using Apple’s software programs like iWork (Apple’s office suite) and are not compatible with other operating systems like Microsoft.

Why is a Windows Computer Best for the Blind?

One of the things Windows has going for it is that numerous computer brands such as Toshiba, Dell, and HP operate on Windows.

Windows comes equipped with a voice synthesizer and screen magnifier and is compatible with many assistive technology software programs. This means you have a variety of computers to choose from at a wide range of prices and you can choose a screen reader program, a screen magnifier, and many other assistive technologies that best suit your needs.

If these features aren’t enough for you, some of the best screen reader programs such as JAWS, Serotek System Access, and NVDA are made for Windows. The built-in screen magnifier on a Windows computer is possibly one of the best because it can be operated through shortcuts, touchscreen, and zoomed to over 300%.

Apple and Windows offer several outstanding features that make using a computer easy and fun for those with visual disabilities.

We even suggest you trying out an Apple and Windows before purchasing one. In some cases, people purchase both!